While some of us are either busy in the yard, or catching up with office work at the weekend, Vernon has taken part in his second weekend preparing for the Fastnet Challenge.

Friday 19th June 2015
Our third race started at 1930 on 19th June with a spectacular run under spinnaker down the eastern Solent and out past Bembridge ledge en-route for Guernsey. All was well until a  crew member went to the windward heads, in socks (two mistakes  later admitted), and took a flyer from the windward heads across the companionway and through the leeward heads door, making a very firm connection  of  face on sink unit...........and lay VERY stunned, and bleeding. Some attention made a temporary repair to a facial wound, but the casualty had also impacted eye and teeth : the wise move with a head injury such as this was to put  ashore for an A&E assessment, which we did, with a trip back to Portsmouth, costing us 12 hours. (A later report suggested the casualty was OK, fortunately, though pride will have suffered.) We continued racing, but did not have time to reach Guernsey, though we had some excellent sailing, and a variety of changes, notably from spinnaker to Yankee2 + staysail at night, slightly later than ideal, and very strenuous in ‘bouncy’ conditions, but better not to attempt that when crossing the main shipping lane ! We all arrived back very tired, but had some welcome rest at anchor in Sandown Bay before making our way back to Portsmouth. 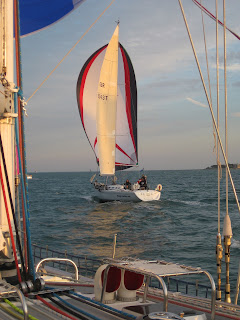 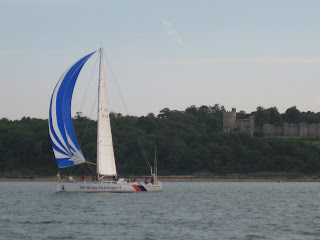 Some of us have lost weight : I certainly have, despite plenty of ‘fuel’ on board.

We have now completed our training for Fastnet (which this year is reported to have over 500 entries), so the start on 16th August certainly should be spectacular down the western Solent and through Hurst Narrows

I will report back on Vernons experience when he has completed the Fastnet Challenge, in the mean time we have our own exciting times ahead, delivering a new along boat to Falmouth next month, along with joining in with the Drascombe jolly going on and all the family going sailing, ending up with being invited to the launch of the new Longboat, which we are very excited about, as Mrs Kate Watkinson and her son James will also be in attendance, what a great photo that will be.

In the meantime, it doesn't look like I will be out sailing before Falmouth, so Dick P owes me some sailing time for cancelling.

Posted by Sharon Geary-Harwood at 21:40 No comments:

This past week has been busy for us here in the yard, sadly no sailing for me, however we had the second boat show of the year at Beale Park, and personal delivery service of a new Longboat to Greece.

Tony and Steve arrive to collect the new Longboat which they are going to deliver direct to its new owner in Koroni in Greece, the plan is for them to drive down through Europe and catch a ferry from Brindisi to Patras, and then onto Koroni.

Sunday I get the phone call to say that all three have arrived safely at the final destination, and that

the owner is very happy with his boat.

The first of three days at Beale Park, this is the smallest of the boat shows which we attend, and as we gave it a miss last year, we were pleased to be back this year.

The weather was good for us this year, as I can remember the time when Stewart went with a gazebo, and didn't bring it back, it was so windy the gazebo ended up in the river.

Saturday, both Simon and I were there talking to old owners, and prospective new ones, everyone complimented us on the quality of workmanship, this is something which we pride ourselves on.

Sunday, and Simon and Hannah arrive at the show early, with Hannah going to help Steve at Hobie Cat for the day, after working from home first thing, I arrive with Lauren and Kyle, this will be Kyle's second boat show, as he attended Southampton at only five weeks old. 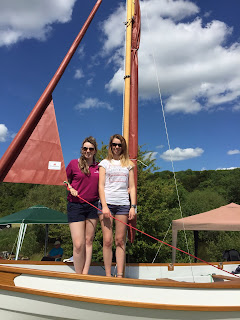 Soon, the three days come to an end, it was great to see old friends, as well as making new ones, as I was leaving the show,a I had the news from Tony that he had arrived in Koroni, and the new owner was extremely pleased with both the boat and the personal delivery service.

Back in the office on Monday morning, and sell a brokerage boat, what a great way to end a good few days.

Now time to count down the days until I go sailing again, this time it will be from Ashlett Creek, near Southampton as Daislebee has a new home.

Come back soon to read about my lesson on "luffing" xx

Posted by Sharon Geary-Harwood at 11:53 No comments:

Yes, you have read the headline correctly, but sadly it is not me entering into this the worlds largest, most diverse fleet of offshore racing yachts which will set sail from the Solent on 16th August. Maybe one day, but at the moment I am happy to let the more experienced have some fun!

Vernon who works for us is entering this year, read below for his story on what he has been up to so far.

I was attracted, around my 60th birthday last year, by the idea of still being eligible for anything with ‘youth’ in the title, and having had some very specific adventures on the turns of the decades, decided to sign up!

TSYT (in addition to TS Stavros Niarchos, a catamaran and other vessels) has 4 steel, 75’, Challenge yachts, originally designed for round the world racing. These boats are heavy (57 tons), but inspire considerable confidence : the crew will break before they do ! The programme consists of a week-end shore training including safety and sea survival, a training week-end afloat, and three offshore races before the Royal Ocean Yacht Club Fastnet Race starting on Sunday 16th August from Cowes around the Fastnet Rock (and light), off the south of Ireland, and back to Plymouth : approximately 600 miles. Each Challenger has skipper, mate, 2  watch leaders and crew, with a full complement of 16. The cutter rig carries main, genoa, Yankees 1,2,and 3, staysail, spinnaker and storm sails. The main and boom together weigh over a ton; the spinnaker poles are a heavy 2 man lift, and it normally takes 5 crew to change a headsail quickly. All sails are hanked on, so there are no short cuts !

Sea survival training included detailed life-jacket training : what it will, and what it WON’T do for you, and finished with  a team effort to swim, linked, from one end of the pool to an upturned life raft, right it and get in, including the unconscious colleague, all while clapperboards were going full blast , and well aimed buckets of water were being discharged from the poolside into faces ! Fresh, warm water in daylight was quite enough for this exercise : the alternatives are less attractive.

Challenger1 has Steve Durkin as skipper and Mike Perham as mate. Steve is a very experienced offshore sailor with several Fastnets and a Round Britain win on his CV : Mike was the youngest solo circumnavigator at 18 years old and probably pumps bottles of competitive adrenaline in the gym! Both inspire confidence in their slightly different ways and Steve’s quiet observation and assessment of the variety of crew skills makes best use of very varied talents and experience.

The first week-end afloat saw a mixed bag of tasks and tricks with everyone getting a chance to do most roles and tasks, from the inevitable heads cleaning (!), cooking, sail sets and changes to helming. Our first race (Cervantes) from Cowes to Le Havre was in more bouncy and blusterous weather than expected, and after a spinnaker run down the western Solent several yachts broached in open water in Christchurch Bay. We felt rather smug, not being under spinnaker, but learnt watching the others in their discomfort. Having left Cowes at 1030 am, we got to the finish at 8 am (second in class) before turning back for Portsmouth arriving back late in the evening. We had spent a large chunk of the week-end healed at 30 degrees, and bouncing well : any movement around the boat means effectively climbing, and basic living becomes a challenge. Sleep came easily in narrow well lee-clothed bunks, taking advantage of downtime around the 3 hour night and 4 hour day watches.

Our second race started well, leading class to Hurst Narrows, but then we lost all steerage having picked up a pot and lines which were well wrapped around our rudder : not an ideal venue for this event with a strong tide running and the area very busy. (150 yachts had started.) It took a few moments to get a ‘diagnosis’, but Steve dealt with the issue in the calm manner that has become his trademark. We took a tow from Challenger2, who kindly withdrew from the race to assist us, back to Cowes where an early morning diver removed the offending items, and had time to get back for communion. Although the disappointment was considerable, things worked in our favour : the light airs meant many boats withdrew from the race in order to get crews back home in time for work after the Bank Holiday, while we drilled, drilled, drilled and drilled, completing 30 sail sets and changes including 2 spinnaker hoists and not including standard tacks or gibes. In short we have become quite an effective crew, and enjoyed a ‘round the island’ cruise in the process.

Some of us have lost weight : I certainly have, despite plenty of ‘fuel’ on board. Our next race is to Guernsey before reconvening for the Race proper in August.

Posted by Sharon Geary-Harwood at 14:05 No comments: