Helping with Daislebee and the AGM

FRIDAY 18TH MARCH 2016
The one advantage of being the boss, is sneaking off work for the day.
Knowing Dick was going down to ASC to start preparing Daislebee for the first sail, I offered to help him. Well, as I get the easy job of holding the tiller while sailing, I thought I would see what goes into preparing her for sailing.
Arriving on Friday morning, (Thursday was so much nicer and warmer) I found that Dick had already polished one side of the hull, as well as cleaning up the bottom of the boat.

First task was to help with putting the mast up, with sorting the halyards out, and making sure we didn't get tangled in them we were soon ready, mmmm I am still working out who had the easier task here, Dick was pushing the mast up, while I was holding a rope pulling the mast, first attempt we found there was a block under the tabernacle, so we started again. Second time, no problem, straight in place. With bowsprit in place, and the mast safely secured in place, that was one job out the way.

After a quick bite to eat in the Mill (also warming up) we went back the boat to start on the next task, empty everything out, this is going to be fun.


Actually, when everything is all laid out on the ground, it doesn't really look much, but I am sure now it has all been sorted out and either packed neatly into less boxes, put in Dick's car to go home, or thrown away, then there will certainly be more room on board now, as well as less weight.


I just hope that Dick remembers to buy some more food provisions - just in case!

Next was to brush out and hoover the cabin - oh some people do get it easy, leaving me to do this task.


Once everything was back in place, with a couple of empty boxes, it was time to pack Daislebee way for now, so putting the cover back over her, we tied her down, until the next trip down - where I have been informed I can help service the engine, it's a good job I am prepared to get my hands dirty.

I will say, that during my time helping Dick, I took numerous work phone calls, from either potential buyers, brokerage boats agreed for sale, and a visitor due in the yard next week, along with some orders for spares and accessories, so all in all a productive day.

Time to say goodbye for now to Daislebee and Dick, now I am starting to look forward to some more sailing.

Hard to believe that it is a year since the last AGM, so here we are gain back in Bristol for the 30th Drascombe Association AGM.

Simon drove me to Bristol (he went for a walk around) while I attended the AGM.


Sadly fewer people attended this event than the one the previous weekend in Holland which Simon attended on behalf of Churchouse Boats, over 70 in Holland, compared to about 30 in England.
The usual discussions went on, membership figures are at just over 1,000, when there are over 6,000 owners of these boats there. Finding new ways to bring new members to the association is always hard, so I put to the Association, that with immediate affect, Churchouse Boats will pay for the first years membership for every new boat and brokerage boat it sells. It will be interesting seeing the membership numbers next !
I spoke briefly about Drascamp, which is taking place at Cleavel Point in Dorset. so far we have had nearly 50 people register an interest, and 7 families have signed and paid up, so it is looking good.

Being at the AGM, I was lucky to be able to collect on behalf of Dick, his winning prize in the photo competition. A lovely photo taken at St Just In Roseland, when some of the SCG went for a three week sailing trip last year. 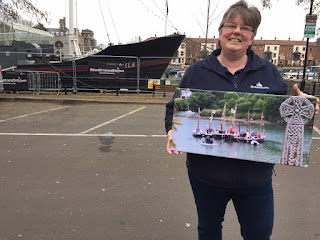 Me with Dick Pizey's winning photo

At the end of the meeting I was able to present the Churchouse Boats Trophy, which is award for "The spirit of the Association", I can not think of any one else who this award should be given to, so I was pleased to present to Jack O'Keefe two tankards for Nathan and Fergus Ogden, for their achievement last year of circumnavigating Ireland, well done, and such an inspiration to us all.

The AGM was followed by a meal in the evening at Loch Fyne, where Simon joined us, another successful event, with some work due in the yard from a Drascombe owner.

That is the end of my busy couple of days, two completely different ways of being involved with sailing and the Drascombe community.

Now back to my day job until the sun shines, and the sails are up xx

Posted by Sharon Geary-Harwood at 15:34 No comments: