A couple of months ago, I was contacted by Garry from Australia, who required some information for a Drascombe Lugger, after hearing of this lovely story, I asked Garry for a write up after the birthday celebrations. 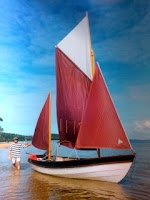 The Drascombe come from a good mate Peter Matheson, who purchased her new and imported her from the UK, where she was made at Honnor Marine, Totnes, Devon.
Peter enjoyed sailing her around Moreton Bay and Hervey Bay in South East Queensland.
Peter had known Andrew since he was born and was pleased to strike a deal which would allow the boat to stay within friends and family.
The plan to gift the vessel was put in motion. 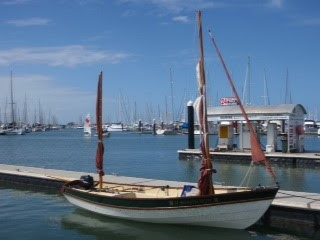 Peter took Andrew out for a few sails to show him the ropes, tips and tricks. A quick sail from Wellington Point on a glorious reach too Peel Island sealed the deal.
Andy has been involved in sailing all his whole life with the family yacht a 40" sloop, "SV Antipodes II", competitive dinghy sailing with Royal Queensland Yacht Squadron, and his secondary school sailing club.
﻿
We decided to gift the vessel to Andrew for his 21st Birthday, and rename her in the traditional manner.
As is the custom to begin calling of Poseidon to amend his “Ledger of the Sea”, with generous toasts to the boat, previous owner, Poseidon, Greek god of the sea, Aeolus Greek god of wind, and the new owner Andrew.
The challenge was on for a name, Andrew eventually came up with the name for her II (2)Bobs Worth, Aussie slang for Having your say i.e.. Putting your 2 bobs worth in. Also Andrews dog  is called Bob, a real character, and he has a tag that Andrew and Rian used in the design of the name. A pirate dog...Arrrrrr.
﻿
﻿
﻿
﻿﻿﻿﻿﻿﻿﻿
﻿﻿﻿﻿﻿ 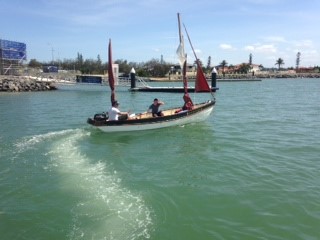 Our thanks to everyone who made this a special day; you can watch the naming ceremony on utube at https://youtu.be/R7Y2PQUSGYg
Churchouse Boats are very proud to have been part of helping Andy celebrate his 21st Birthday, along with a printed Lugger manual, polo shirt, pin badge, we are also paying for a years membership to the DA for Andy.
We wish Andy all the very best in the future, and hope he has many happy years sailing in his Drascombe Lugger.
﻿﻿﻿﻿
Posted by Sharon Geary-Harwood at 08:35 1 comment: