We all know the history of how Drascombe boats began, for a few years now I have always been curious of the whereabouts of Katharine Mary.

With the 50th Anniversary of Drascombes in 2017, I thought how nice it would be to have the original Lugger on show against a current production Lugger, so I set out to find her. Luckily it was easier than I thought

So one Sunday back in October last year, I set off for the drive with my mum to visit the owner, Graham has owned KM since 1976, and for the past few years has been sat on dry land. Meeting with Graham and his wife was lovely, I went with the aim of asking if we could use her to go on show during the 2017 celebrations. However once we got talking, and I asked what their plans were for her, Graham asked if I would like to buy her, well to say I was surprised was an understatement, how could I say no to an offer like that.

After some talking and looking over the boat, I agreed with Graham a price which we would pay for her. 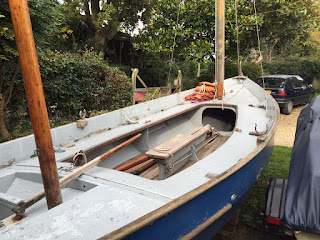 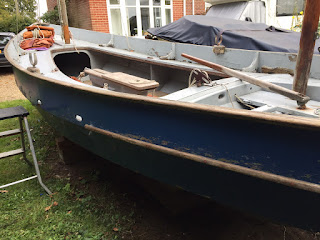 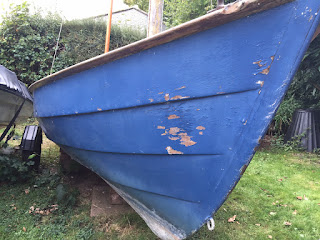 Upon arriving home and telling our daughters about Katharine Mary, Lauren and Hannah decided to buy the boat themselves, preserving a piece of Drascombe history.

Our plan is too refurbish Katharine Mary back to her originality as much as possible. Kate Watkinson and her son were delighted to hear that we had found KM, and what are plans for her will be.

I will update my blog as often as I can about her progress, as I am sure there are many of you interested in her.

Katharine Mary will hopefully be on display at the London Boat Show 2017 all being well, along with a new Drascombe Lugger, however if I have my way there will be a few more Drascombes on the stand .

What a great way to start the 50th Anniversary year.

The first bank holiday in May is the starter for the season for many of the Solent Cruising Group.
With the usual Drascombers arriving at Ashlett on Tuesday/Wednesday last week to do last minute preparations to their boats.
On the Wednesday evening, Simon, Hannah and myself arrived at The Mill at Ashlett to join them for an evening meal, Curry and a pint for £7.00 not a bad deal.
Ian, Glenys, Tony, Dick, Brad and then Nick kept us entertained of stories and adventures. The highlight being when someone asked who remembered a torch to walk back to the boats, when Tony put his cap on, with a built in torch, how very civilised.
Leaving them to make their plans for the next day, we headed off home.
Saturday, I receive a message fro Dick to say that the group would be heading to Porchester in the evening as planned, and if we wanted to meet up with them then to head down to Porchester later on.
Simon and I decided to drive down early, and went to Wicormarine where we waited for them to moor up and headed to the little café for refreshments. As I was down here, I thought I would make the most of an opportunity of having a sail, the second one of the year for me.
After getting my sailing jacket and life jacket, I say goodbye to Simon and headed off to meet the fleet. 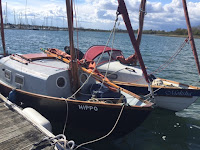 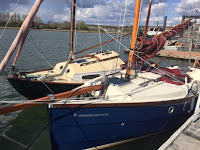 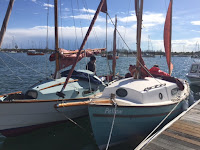 After getting on board of Daislebee for the first time on the water this year, I was looking forward to some sailing, we motored out far enough for Dick t then put the sails up.
Once the sails were up, off we went with Dicks guidance through the boats, what he has too remember is my last real time on the water was in August last year, and since then I have been running a business, home and been asleep since then.
Tacking, jybing, looking which way the wind is coming from, watching for the boats and buoys coming towards me, was starting to get too much, grrrrr men!!!!
Looking back at the other boats following us, we saw a lovely black cloud following us, haha, this could now be fun, after being told to get my sailing jacket on, off comes the life jacket, fleece and jumper, on goes the jacket, well it would if the Velcro didn't all stick to the wrong bits, and if I could do the zip up it would be easier, having a slight problem up top, looking down to put the two zip bits together with cold hands was proving rather challenging, especially when being rushed!!
I gave up in the end, leaving Dick to get his wet weather gear on, I lie on the cockpit while Dick does the zip up for me, along with lots of giggling, luckily just in time, as the weather turned horrid, with the boat heeling, I was holding on for dear life, however I was reassured that the Shrimper 19 wouldn't capsize, great, I was more worried about falling overboard with moving from one side to another of the boat.
Once the rain come in, I dived into the cabin, as I realised I left my waterproof trousers in the car , lesson one be prepared!! Leaving Dick to bring the boat into Porchester, I was dry below.
Once moored up, we were met by Richard and Wayne who were out for the first time in a Coaster from St Denys Sailing Club. Simon and Glenys had been watching from the shelter of Porchester Castle, although there were a few giggles when I text Simon to say I was sat in the cabin, as I forgot my trousers, luckily everything is taken with a laugh and joke.
Taking shelter in Porchester Sailing Club, we were made to feel very welcome and was able to warm up. Sadly they did not provide food, however they did recommend a local fish and chip shop, and I have to agree we all had clean plates
Soon the evening come to an end and it was time for Simon and me to head back home, leaving the other to take to their bunks.
A lovely enjoyable time had by us all, but sadly no Stewart with Bolitho this weekend, so I still have to wait to go out sailing with my father-in-law.
Here's to the next sailing lesson, and maybe this time someone will go back to basics for me.
Happy sailing xx

Posted by Sharon Geary-Harwood at 13:08 No comments: