The new season begins and a family engagement

It seems so long since I was last out on the water, apart from a quick motor when Dick P was having his trailer serviced, I haven't been out since last October.

The bank holiday in May is always the start of the sailing season with our Drascombe group, where they head of for several days usually to the IOW.

As Dick was going to join them a day later, I was able to go out for just over an hour and practice some tacking, the weather was a bit blowy, along with some rain, but in the right weather gear it doesn't bother me.

Howard had just come back in from the IOW, and said it was quite a crossing, at least he had God on his side.

Dick put a reef in (past experiences) and soon we were sailing, I really have come to appreciate the beauty of sailing, being out on the water and seeing where you end up.

Sadly it was soon time for me to depart the boat, and for Dick to sail over to join the others at Shepards Wharf.

I headed off to join Glenys for a bite to eat, as Ian was part of the sailing group.

Monday sees us enjoying a day off, only to have a phone call from my daughter Lauren to say that she had just got engaged, wow things do happen quickly in our house, the week before, Lauren and Jamie had picked up the keys to their house they are buying, now an engagement.

I am so pleased for these two, Jamie has worked for us for nearly a year, he has joined us at the boat shows, as well as learning a new trade.

Now there is the next generation for Churchouse Boats to continue, my little Grandson Kyle, is already a regular at boat shows, and is a real little charmer.

Congratulations Lauren and Jamie, also not forgetting the third person in this new family, Kyle 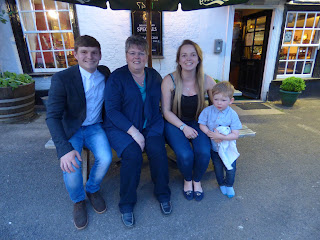 As I started this post a few weeks ago, I have now just got back from Chichester, having joined the group last night for the usual meal in the clubhouse.

Some new faces amongst the group, along with some familiar ones too.

Now back to work and catch up on emails, from the 1st June we shall be fully functional at our new office and workshop, more details to follow along with photographs.

Posted by Sharon Geary-Harwood at 20:07 2 comments: