Wow, where do I begin, apart from Happy New Year to you all. It is hard to believe that two weeks ago we were at London Boat Show, and here I am now catching up on emails, sending out quotes, but also updating my blog so you can all see what I have been up to.

It starts for us on Thursday 5th January, when Dick P arrives to collect one of the two boats going to the show.

With Dick and Hannah in one car, Simon and I travel up in the second one, once at Excel it is time to queue for the access to the hall, this was nearly as long as the journey for one of us. Once in the hall it is time to move the second boat in and get the stand looking good. 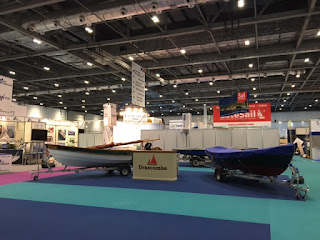 After Lauren, Kyle Jamie and Stewart arrived on the Thursday afternoon, it was off to the pub to start the celebrations.

Friday was an early start for me (Hannah come along to keep me company), as I had been asked to be interviewed by Radio 5 - Wake up to breakfast, well to me, it was who will be awake to hear this, well I was pleasantly surprised by messages I had from people who I did not know, wishing me well at the show - people are so kind.

Next was waiting to be called for BBC Breakfast, I was live at 7.49am, this was interesting as I was unsure of what I was going to be asked, however it turned out that the interest was women in the marine industry, apparently there are few women in owner/director positions, so I felt honoured to have been asked from the few there are.
Following on after the interview, it was then time to get the stand ready for the 10am opening, at 1.20pm we were having a media event, where Stewart Brown done the speech of the history of Drascombe, and the future.
This was well attended by the media, old friends as well as three very special Guests, we were honoured to have with us Anna and Emma who are the two daughters of John Watkinson, along with Charlie who is one of John W's Grandsons. 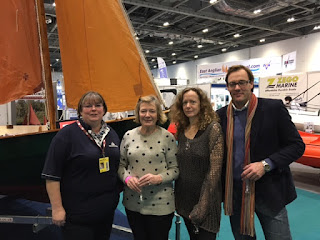 I felt very honoured to have been able to have the chance to meet them, I have met James (Johns youngest son) on several occasions, and along with Kate we have a great relationship.
Stewart's speech was about the past, present and future of Drascombe, he gave details of boats which had been designed by John, along with how we found Katharine Mary and refurbished her ready for the 50th Anniversary this year, this followed onto the future and how Peter Thomas has come on board at Churchouse Boats, and the moulds are now being produced at Cornish Crabbers in Cornwall, a working partnership, which can only mean bigger and better things for us all. 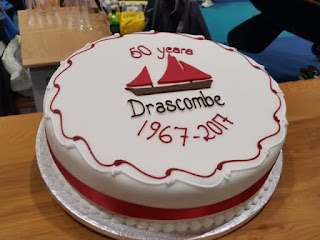 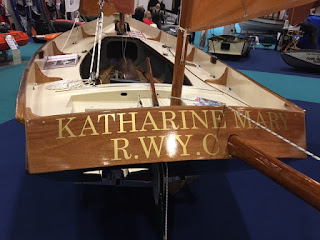 Above is a selection of photos from the day.
Following on from being on such a high, my family all had to leave to go back home, Simon headed back too as he was flying out to Chicago on the Monday, this left just Dick P and myself for the duration.
The week started to go quickly, with visits from fellow Drascombers old and new, everyone we spoke to was complimentary of the work undertaken on Katherine Mary, I even had offers to buy her. Ian and Glenys arrived on Sunday to help us for a couple of days, it is always great to have owners on the stand, as they give reasons why they decided to buy a Drascombe, rather than listen to the hard sales talk - anyone can do that !!
On Wednesday at 8pm our time, Simon was at Chicago Boat Show for the opening, Mark the owner was very pleased with his purchase, and enjoyed collecting her from customs and delivering her to the show with Simon. 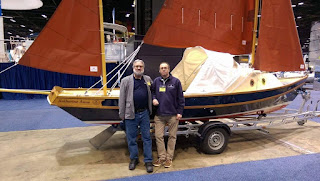 During the course of our week, I met Steve McFadden (Phil Mitchel from Eastenders), Robin K-J come along to say hello, I had my usual chat with Sam Llewellyn and met the lovely Chris Eakin (even buying his book). 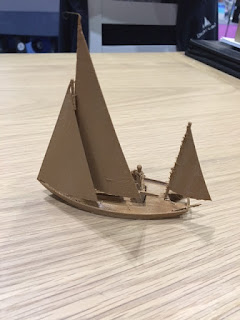 One absolute highlight for me, was when one of my customers gave me a present of a 3D printed model of a Drascombe Lugger, WOW, one of a few times I have been speechless, Thank you Andrew I will treasure this, but will be talking to you about making some more.

Sadly, the week was coming to an end all too quickly. We have spoke to many interested parties, given out quotes for several new boats, enjoyed the attention for Drascombe being 50, but most of all, we SOLD a new Drascombe Longboat, well done to team Drascombe.

Thanks really have to go to Peter Thomas from Cornish Crabbers for all of his help and support, but most of all to Dick P for being part of the team for the duration of the show, his many hours of putting the presentation together about the history of Drascombe, setting up, packing away, keeping me sane, encouraging me to drink a few more G&T's, lots of laughs, but most of all great company.

That's the boat show over with for the next year, however we do have the Drascombe Golden Jubilee in July to look forward too, for more information email 50years@drascombe.co.uk

Back to work for me, hopefully some sailing soon, I am looking forward to more adventures this year.